This time of year has sherry on the radar, especially with the upcoming Sherryfest in New York City. It only seems fitting that I had a little sherry celebration of my own here in Portland, Oregon. 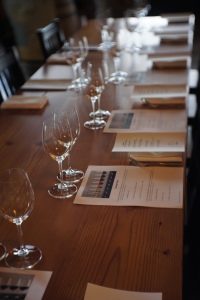 The Portland Culinary Alliance provided an amazing opportunity for me to present my first sherry tasting at Cyril’s at Clay Pigeon Winery. The evening would not have been a success without the support and partnership of Sasha Davies. She and her team pulled out all the stops from setting up the room, to serving the guests, to providing the perfect pairings for each wine.

Sasha and I chose to showcase sherry as a wine for any style of food, not just tapas! The rule of thumb I was taught is: if it swims – pair with Fino or Manzanilla; if it flies – pair with Amontillado or Palo Cortado; if it runs – pair with Oloroso. 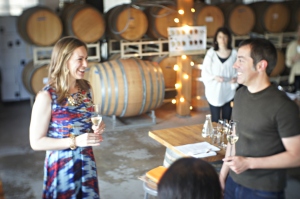 For a Tuesday night after fighting rush-hour traffic, guests were greeted with a glass of sparkling wine to help unwind. It’s an easy transition for those who may not be familiar with sherry. Once seated, the sherry and food were served in groups of two while I told them a story; beginning, middle and end. 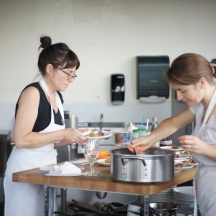 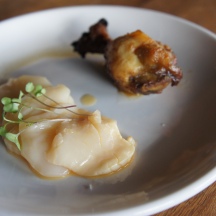 First they were served Inocente Fino from Valdespino paired with scallop crudo. I chose this Fino because not only do I love products from Grupo Estevez, but I love that this Fino has been aged for ten years under flor. Not only is it a challenge to sustain the flor yeast cap for so many years, but it also gives the wine a rich complexity of flavor and color unlike any other fino. The scallop crudo had an amazing brightness that was not only enhanced by the Fino, but brought out the characteristics of the wine in return.

Along side the Fino, guests were served La Garrocha Amontillado from Bodegas Grant paired with a chicken drumette with dates, olives and capers. This was my first Amontillado I fell in love with. I love it even more after having visited Bodegas Grant back in May. They are amazing people making amazing sherry! (I’ll tell you all about it soon, I promise!) 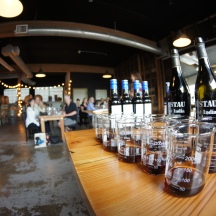 For the middle of the progression, guests were served Palo Cortado Viejo C.P. from Valdespino with pan seared artichokes in sherry vinegar, lemon and thyme. Sherry is one of the best wines for pairing with the most difficult dishes, like artichokes. This was the first Palo Cortado introduced to me and it is my favorite sherry style. Palo Cortado is considered the “rebel” and known for it’s mysterious rarity because it isn’t an Amontillado or an Oloroso, but somewhere in between. I have since tasted several Palo Cortados from other wine makers, but I’ll never forget my first.

For this evening, we did not have a dry Oloroso, but decided to serve a sweetened Oloroso Cream style before transitioning into dessert. Guests were served East India Solera from Lustau with prosciutto and basil wrapped figs. I’ve always loved the story of how its name refers the British trading company and is made mimicking the 17th century trade ships, maturing the blended wine in a hotter and more humid area of the bodega. 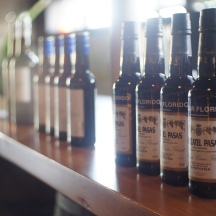 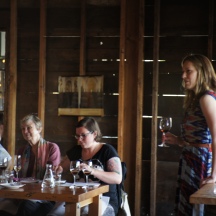 To conclude the evening, guests were served Moscatel Pasas from Bodegas César Florido paired with Turkish apricots stuffed with a walnut on mascarpone and crushed pistachios. As well as Pedro Ximenez from El Maestro Sierra with a lovely slice of Pleinvent Fermier Cheese. I wish I had the chance to visit César Florido, but did not get over to Chipiona where all Moscatel styles are made. I did however receive the invitation to visit El Maestro Sierra. This is a very special bodega I will tell you all about later. I’ll simply say they make amazing sherry using only traditional methods!

This evening was so special for me! My audience was a perfect balance between supportive PCA members, friends and family. I was honored to have local support from Thirdwave Coffee Tours and Conserva. My greatest joy was having my parents and husband there to support me. The fact that my father (a frugal, retired Marine who would prefer a meal at the Village Inn) came across town during rush hour and smiled the entire night meant the world to me! Portland is full of good people who support those living out their dreams! 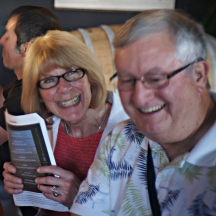 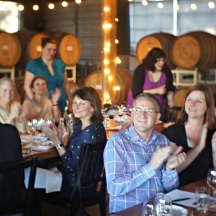 It could not have gone any better for my FIRST event. The many smiles,  praises and even a couple critiques I received by the end of the evening only further confirm I’m exactly where I need to be on this journey!