Sherryfest is in full swing in New York City this week! I’m unable to attend, but I’m not bitter. I owe my passion, or should I say obession, for sherry because of Sherryfest!

In March 2013, Sherryfest West, Galaxy Wine and Cheryl Wakerhauser, the owner and chef of Pix Patisserie/Bar Vivant invited several sherry ambassadors to represent their wines in Portland, Oregon. Cheryl is the trailblazer for putting sherry on Portland’s radar. She has the largest sherry menu in town with some of the best the Marco de Jerez has to offer!

Had I not attended, I never would have met Jan Pettersen from Fernando de Castilla or Jaime Gil from Grupo Estevez. Out of several representatives, these two men took time to talk me through their wines, and made sure I slowed down to enjoy each one. You can read more on that night in my first sherrysips post.

Last June, Sherryfest returned to the west coast in San Francisco. I was only able to participate through Twitter feeds. However, a small Sherryfest after-party came to Portland only hours before I had to board a flight to Costa Rica, but I was determined to fit it in!

Jan shared his some of the best from his bodega: Fino en Rama, Amontillado Antique, Oloroso Antique and Pedro Ximenez Antique. His wines are refined, aged to perfection and in my opinion, worth way more than their price tag! 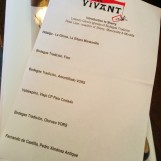 After my quick visit with them, I zipped over to Pix Patisserie/Bar Vivant. I love that Cheryl Wakerhauser always provides opportunities to learn about sherry from the wine makers on her menu! This time it was Lorenzo Garcia-Iglesias of Bodegas Tradición, the first bodega I toured, and Peter Liem, co-author of my “sherry bible” Sherry, Manzanilla & Montilla.

Now one year later, I am celebrating Sherryfest NYC through social media streams. I love what Sherryfest does to bring sherry into mainstream drinking scenes. Someday, I will attend again and hope to meet the many sherry lover connections I’ve made in the past two years. Until then, I raise my copita from Portland and encourage everyone to Drink More Sherry & Get Flor’d!

📷 from @enramistas Enramistas Sherry Club Spring 2021 is Live! 💃🏻💃🏻💃🏻💃🏻(link in bio)
Verdict is in, this is not great wine, but the box is fun! I was hopeful because it does smell nice, like dried flowers or potpourri. But on the palate it was pure acid and alcohol, laced with a little tannin. It truly tasted like they added citric acid to boost up flabby bulk wine, but went too far. Oh well. I couldn't pass up a random box and not try it!
Flowers and sherry to celebrate Valentine's Day! I opened my last bottle I've been saving from @enramistas. This bottle from @gutierrezcolosia was the first #Oloroso I fell in love with. I can't find it in Oregon anymore. It smells like dried rose petals, maple syrup and cinnamon. Such a tiny bottle must be savored without wasting a single drop. When I finally visited this bodega, it was Juan Carlos who encouraged me to get a solid wine education. That advice has opened so many doors! I have so much more to learn. Whether you're a fan of Valentine's Day or not, be sure to pause and celebrate the things you love, including yourself.