This spring, I received encouraging words from Jan Pettersen of Bodegas Rey Fernando de Castilla. I was doubting my voice as a sherry blogger. He said the industry wants to see more blogs like mine from the consumer’s point of view. When it comes to the masses, they’ll typically take the opinion of a friend over the experts.

I first met Jan at Sherryfest in 2013. He was easy to learn from and took his time explaining each wine. Knowing he travels frequently, I was excited we would be in Jerez at the same time, and set up a tour of his bodega. I was welcomed in the morning on the beautiful patio. We chatted a little about his beginnings and how he became the owner of Fernando de Castilla:

“I am Norwegian, but we always had a family home in Spain. In the 70’s my parents settled in Spain. I took an MBA in Barcelona and joined Osborne straight from the university in 1983. I had a big interest in sherry especially. It has such a fascinating history and is such a unique drink. When you learn to like it, you like it forever. 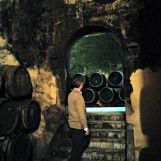 This company was created in the mid 1960s for the local Spanish market. My predecessor, Fernando, saw that what was exported as sherry was not very high quality and not the styles that the Spanish liked, in that they were all these sweetened versions. Fernando de Castilla never made this type of product.

I knew Fernando very well and knew they made a special product as a small company. It was always premium and very popular for locals. He asked me to be his partner in 1999, and when he retired I asked if he’d consider selling it to me. So, I bought this company and refined the concept to make it relevant to other markets. One year later, we joined the small company with a small almancenista. This allowed us to have more space and more wine, and allowed us to rebrand for export markets. The labels were created fifteen years ago, but still have a relevant look for today.”

The cellars were the darkest I’ve seen in the region, allowing the barrels to really rest. We started with the Antique Amontillado: “Our Amontillado is very dry, very intense, very defined and almost sharp and nutty like hazelnut. It’s a 20-year-old Amontillado; topaz and amber in color. It’s fantastic with soups, consommé, egg dishes, poultry dishes, mushrooms, and all sorts of things. Many producers with an Amontillado like this will want to soften it by adding an amount of concentrated grape must just to take the bite off it. I think when they do this by touching up the wine it actually makes it less suitable for food.”

Comparatively, the Oloroso was softer and rounder: “The Oloroso is darker but similar in age, about 20 years. They go great with winter foods; stews, pates or foie gras and meat or game dishes. Personally, I drink more Oloroso than Amontillado. The whole idea with these wines is to enjoy them with food. The old lady who likes Bristol Cream will not like this style of wine.” 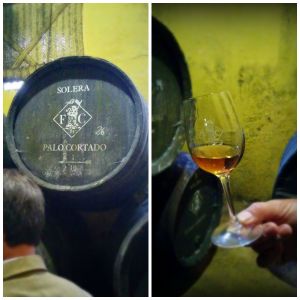 I personally am a Palo Cortado girl, and his was a very special treat straight from the barrel! “The Palo Cortado is a very very good wine. It’s lighter than the Oloroso in color and more intense on the palette with strong toffee aroma. The Palo Cortado is the rarest type of sherry perfection; big aroma, dry but slightly more rounder than the Amontillado. The Amontillado can be a little challenging, but this is softer with a long finish. Olorosos are a bit shorter; they’re not as refined as the Amontillado or Palo Cortado. This brings together everything that is good about a great sherry.”

The Pedro Ximénez Antique isn’t overly sweet with a lot of brightness. I enjoyed drinking a glass of it rather than pouring it over something sweet. “We do three different Pedro Ximénez; one fairly young, one classic and the antique PX, which has almost 500 grams of residual sugar. It has developed a lot of complexity but also quite good acidity, which is quite lacking in most PX styles. It goes great with chocolate, ice cream, toffee, fudge, caramel, and Christmas pudding. It’s a very nice cooking wine as well for sauces for pork, duck breast, or game. Chefs love to play around with it.” 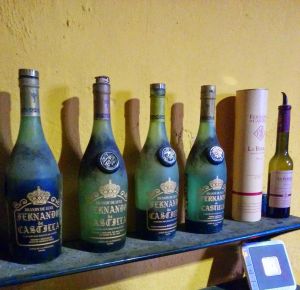 The best surprise was his brandies. So smooth! For someone like me who typically doesn’t like the feel of straight spirits, I wouldn’t mind having a glass of this brandy on a cold night. “Built in 1794, this cellar was where they used to keep Fino la Ina. This is where we store the brandy. The walls are nearly black from the evaporated angel’s share. The brandy is first aged in virgin American oak casks then aged for a longer time in sherry casks. Nothing is added in our brandies, no sugar or color. Our brandies are totally natural.”

We finished our time in the formal tasting room snacking on olives and sharing a glass of Fino en Rama. “Our specialty, in terms of sherry, is very good Fino. All our Finos come from individual soleras. We bottle our regular Finos three times; one in October, one in February and one in May. For our Fino en Rama we do one in October and one in April or May. Fino Antique is only bottled once a year in the spring, because it is special and aged much longer for about ten years when the flor is about to die. It’s basically en Rama because there’s no aggressive filtration or clarification, and we increase the alcohol from 15% to 17%. All Finos were made this way until about 25 years ago. Antique is one of the last traditional, twice fortified Finos. It’s darker in color, has more flor and is more complex. It’s a wonderful wine for smoked fish.

Without changing the concept, we’re not making entry level sherries or supermarket styles. Last year we exported 80% selling 350,000 bottles of premium wines and brandies. The sherry market is regenerating by going back to the wine people fell in love with centuries ago.

Also in decline is the notion that sherry is only for tapas. We’re enjoying it in a meal setting rather than something before the meal or something with pastry mid-afternoon. I always say that you can use sherry with traditional classic dishes like it was used in the past; you can use it with Asian food, Nordic food, starters, soups, and any style. However, I’m not a fan of sherry with spicy food. For mild curries or just a hint of flavor, sherry could be paired very nicely, but not for overpowering spice. Save that for a beer.

Jan always carries an old-world sophistication and it is personified from his labels and bottles to the wines themselves. I am so thankful for his decision to export this high quality sherry!