Lately, I’ve had the desire to learn more about who’s doing sherry cocktails around Portland. What better way to start than by visiting the newly opened CHESA. Chef José Chesa has truly made his mark on Portland with the Spanish cuisine of Ataula in the northwest. Not only am I excited to have CHESA on my side of the river, but also excited to try dishes near and dear to his heart ~ home cooking inspired by his father and grandmother.

The layout is clean and modern with iconic images of Spain around the room. Whether it was a coincidence or not, I was happy to see my table sat under a large print of a man refreshing the solera. If you hope to catch Chef Chesa, be sure to come right when they open before he dashes back over the river to Ataula. My goal was to meet with beverage manager, Emily Metevier and bar manager, Tony Gurdian to discuss their sherry selection and cocktails. 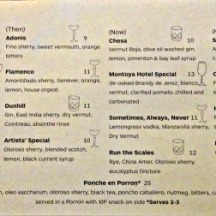 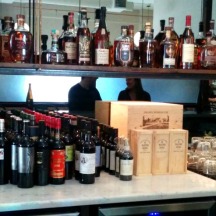 Emily went to culinary school with Chesa’s wife, and has partnered with them since the beginning. Her choices of sherry are simply from tasting through several and selecting which pair the best. One of the newest additions is La Guita Manzanilla En Rama bottled in October 2015. I was amazed by its dark golden color and complexity for only having slight filtration. I made sure to have my friends at Great Wine Buys order me a couple for my shelves.

Tony moved to Portland four years ago from Tennessee. He was the bar manager at Imperial before CHESA, and brings a lot of creativity to the table. Working with sherry is relatively new for him, but he does have a soft spot for Spanish vermut. The design of the current cocktail menu includes several tried and true classics that showcase both sherry and vermut. His intention is to have time to create a rotating seasonal menu.

The cocktails listed under THERE are classic cocktails with a Spanish twist. I learned that Spaniards are crazy for Gin & Tonic, and this one will make them proud. If you’re in the mood for a Negroni, try the Preparando. The THEN list is full of classic tried and true sherry cocktails. The NOW list are CHESA creations Tony and his team have put together. My favorite was the signature CHESA – an incredible balance of Spanish flavor – sweet citrus notes with a savory pimentón finish. If you want a palette cleanser, but not feeling like a glass of Mazanilla, definitely go for the Montoya Hotel Special. It’s like a mimosa on steroids. If you really want to go bold, there’s always the Ponche en Porrón. Don’t know what a porrón is? Just look up at the light fixtures along the bar. 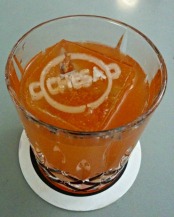 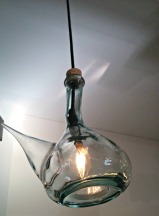 For my meal, I chose a couple THEN classic sherry cocktails. The Flamenco was a little too sweet for me, but the star was the La Garrocha Amontillado from Bodegas Grant. It really comes through in the finish. When La Garrocha isn’t available, Tony will use Amontillado Viña AB from Gonzalez Byass. Like any wine, as with all sherry styles, each has their own character based on the winery, so the cocktail will also vary slightly. After the Flamenco, I tried the Artist’s Special. The El Maestro Sierra Oloroso didn’t shine through like the Amontillado in my last drink, but its delicacy softened the masculinity of the scotch. 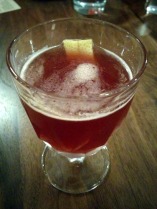 When it comes to food, their servers are full of suggestions. I’ve learned it’s best to bring someone along who will order for me and keep me on task. Whether from nervous excitement or low blood sugar starvation, I couldn’t make up my mind. If you choose to order paella at CHESA, which you certainly should, put in the ticket right away. They are cooked to order and can take awhile. The size and richness can easily serve two. We discovered the pacing of the tapas is really quick, so order about three or four while you wait. 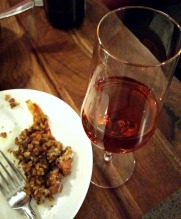 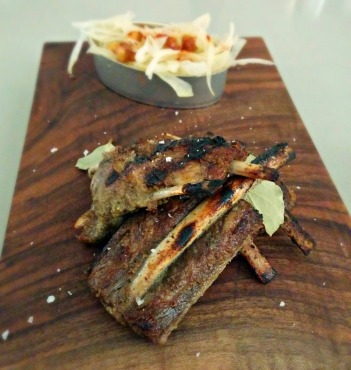 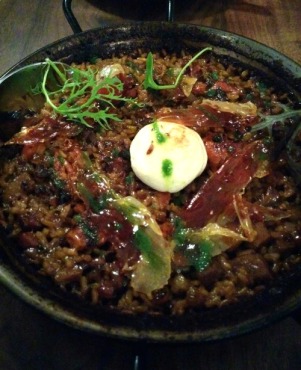 The Croquetas came out + piping hot, but lord, they were delicious! Be sure to dip them in the aioli! The Bravas are nicely fried potatoes topped with a rich, smokey sauce. Chef was sweet to treat us to their Corteza house-made pork rinds topped with mussels. I loved the contrast of textures. A must-have on the list is the Costilla! To have Iberico pork ribs is quite rare in the States. Confit style and rubbed with cumin, thyme, moja verde and white wine vinegar; these are by far the most tender and flavorful ribs I’ve ever had! By the time our paella arrived, I decided to go with a glass of the Wellington Palo Cortado. The CHESA house paella was so rich with the sherry marinated rabbit and jamon iberico. The acidity of this Palo Cortado cut through perfectly. 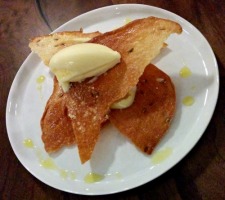 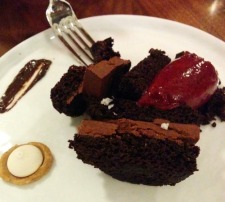 We managed to save room for dessert. These portion sizes are clearly meant for sharing. The Xocolata was drier than I prefer, but the cassis sorbet was the star on the plate. My Torta de Aceite was not a cake as I imagined, but more like a fried crepe with marmalade and cream and ice cream. It was difficult to eat with a fork, so I picked it up like dessert nachos. I do like coffee to end a meal, but they didn’t have decaf, so I chose to have the Palabra de Sabio hot chocolate drink. It is delicious and rich if you like hot boozy drinking chocolate. But I wouldn’t recommend it on a full stomach.

I do love how José Chesa has given Portland a little taste of Spain when I miss it most. CHESA is not trying to copy the molecular gastronomy wow factor of Ataula. That’s not the intention. In every detail at CHESA from food, to cocktail, to décor, you will find a taste of HOME.